You're given a 2D grid that represents a maze-like area. There are some obstacles such as doors and water. You can only traverse on land and through doors that you have the key for. The goal is to find the shortest path from the start to the goal

You can go up, down, left or right from a cell, but not diagonally. Each cell in the grid can be either land or water or door or key to some doors.

There are only keys that labeled a-j. Each type of key will open only one type of door. There can be multiple identical keys of the same type. There can also be multiple doors of the same type. You cannot travel through a door, unless you have picked up the key to that door before arriving there. If you have picked up a certain type of key, then it can be re-used on multiple doors of same kind. 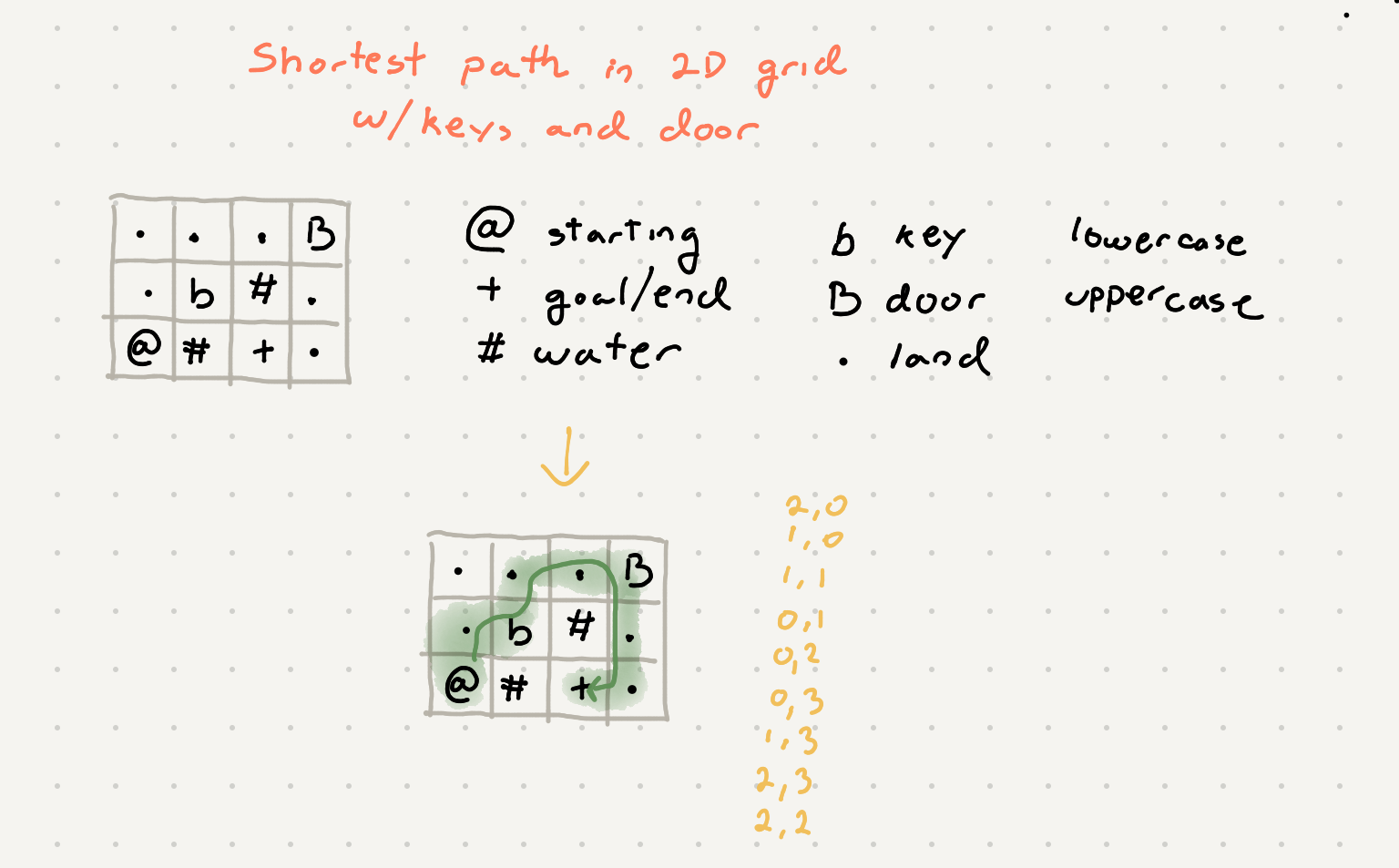 Given that we have a grid we can start thinking of this as a graph problem. We've done some graph problems have constraints in the movement such as Knights tour. We've also done a problem that looks at the shortest path in a grid and also returns the path Shortest path between nodes in a graph.

Let's remind ourselves of what that code looks like -

We will need to heavily modify this BFS approach for our problem.

Let's discuss what kind of changes we need to make

When I first tried to solve this problem I didn't allow the algorithm to travel to a cell that it has already visited. Now this is incorrect because we might have picked up a key that opens a path for us. That path could be the shortest path to the end. Consider the following modified grid with additional door and key -

One possible solution is to not just track the visited cells but also the keys in your possession at the time of traversal. This way if we are visiting a cell with a new set of keys we are allowed to visit it but if we've traveled this cell with the same set of keys we can stop traversing.

So how exactly do we store the key_ring (the container that houses all the paths keys)? A list is mutable in python so it cannot be hashed. We could store a tuple with 10 values each representing one of the 10 keys available. But instead of doing with with 10 int values we can use a 10 bit integer and assume each bit represents 1 key. Let's take a look

So now that we have a new key we also need to keep track of our visited nodes in a different way. We can use a dictionary with the position of the node as the key and a set of all key_rings as the value. Putting it together the traversal would look like this: 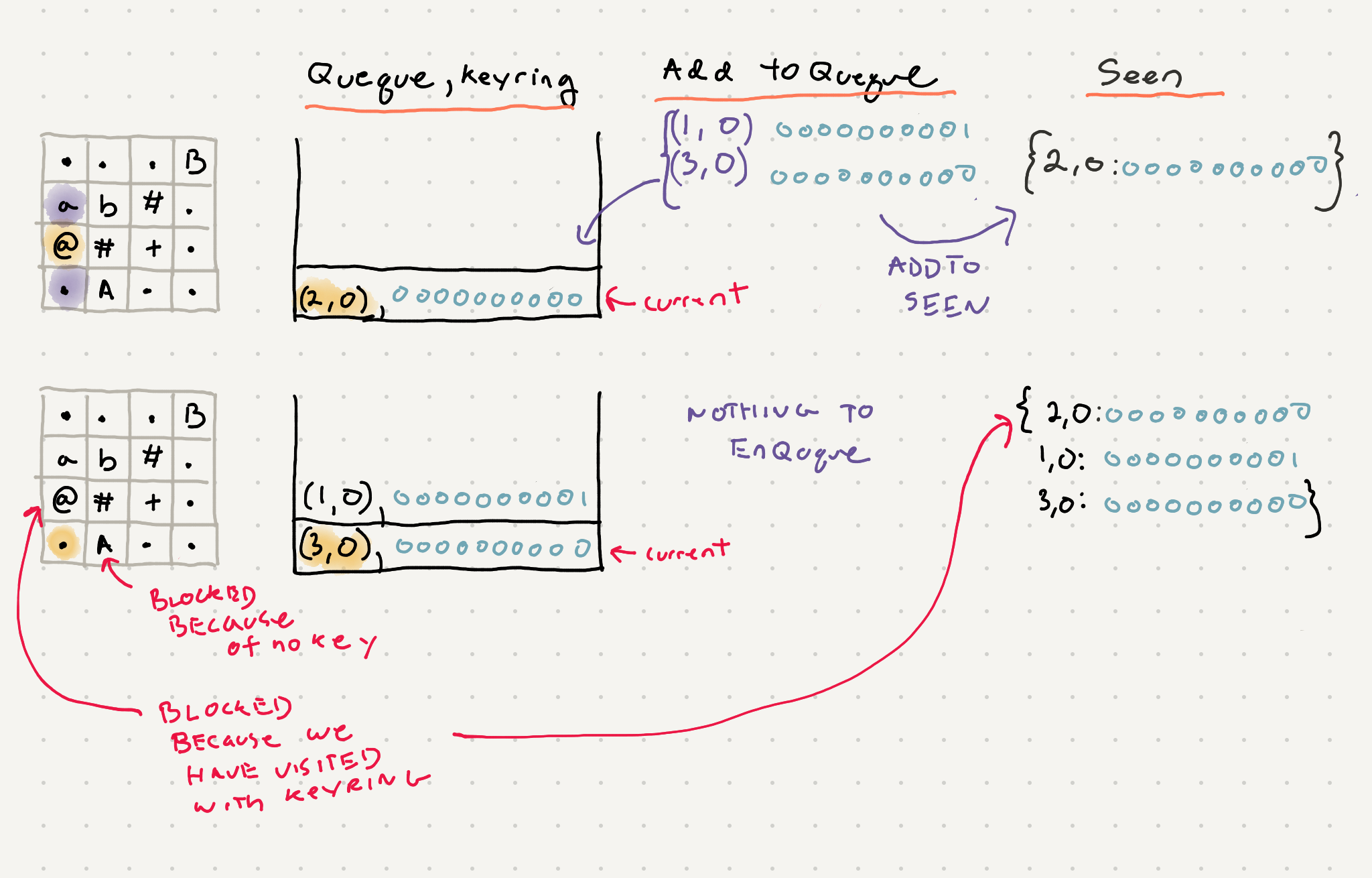 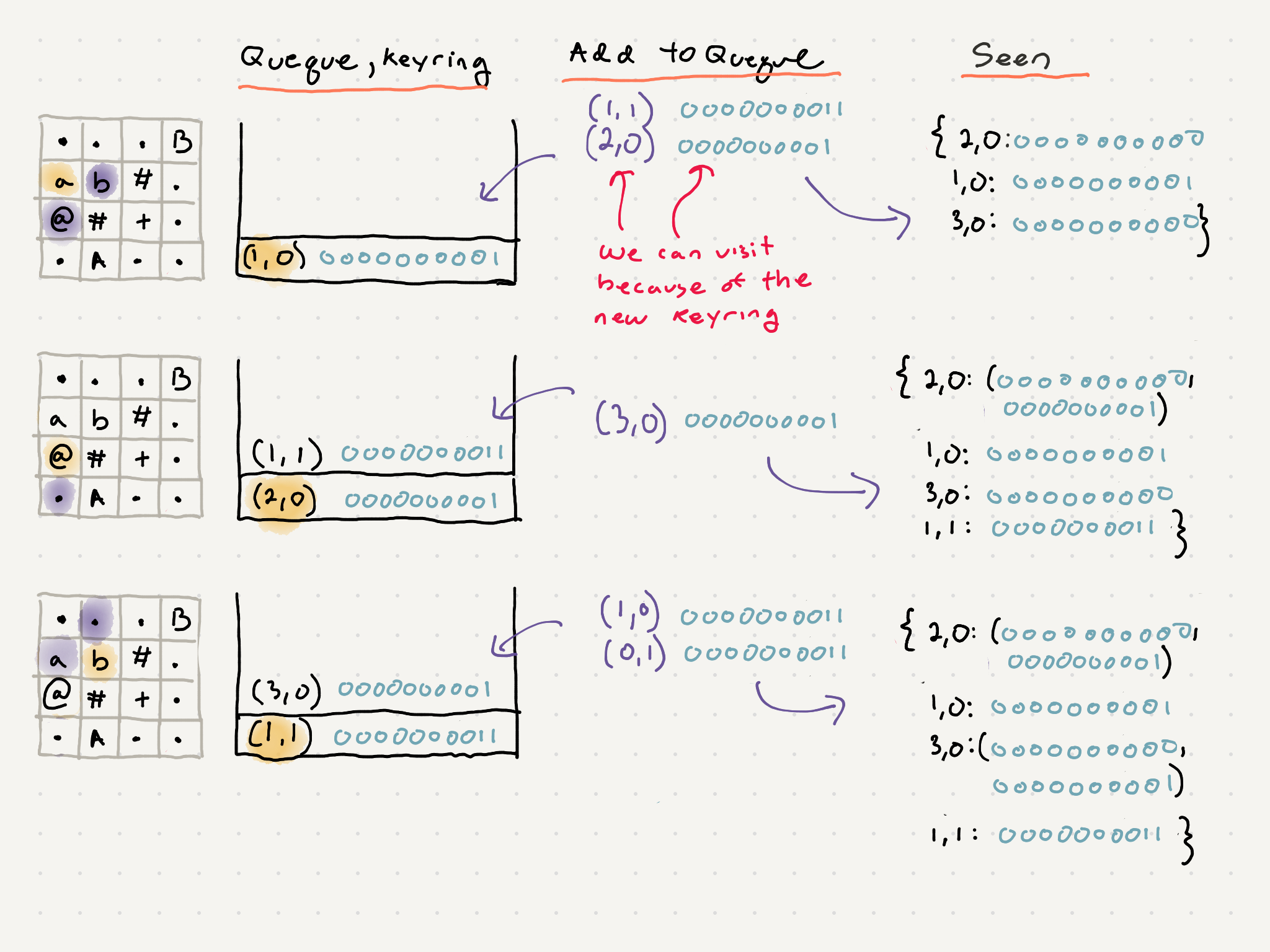 So during the traversals we see we need a few helper functions to block the enqueing of visited cells with the same key ring. We can write a helper function is_visited() to help with this.

So we have a way of efficiently storing the key locations but how do we actually find out if we have a key to a door when we get to it? We can use some bitwise operations and bit masks do do this. Recall each bit represents weather you have the key for a certain letter. So we need a way to look up the value at a certain bit index in our key ring. We can apply a technique called bit masking to do just this.

If we AND / & our key ring with a binary number with only the bit we are looking for filled we will extract a subset of the bits in the value.

And how do we generate the mask value to apply to our key ring? We need to figure out which bit to look at when we approach a door. If you assume the letter A is the 0th position of the key ring than we can “subtract” A from the letter of the current door.

In summary we need:

Let's summarizes as well all our different neighbor situations

Putting it all together